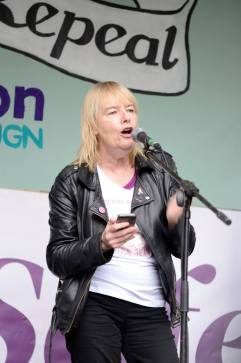 Abortion rights on the island of Ireland are severely restricted, whether in the Republic of Ireland (ROI) or in Northern Ireland (NI) which is part of the “United Kingdom”. The Catholic Church dominated ROI has traditionally been seen as the more backward jurisdiction in relation to women’s rights – contraception was only legalised in 1989 and divorce in 1996, while contraception and divorce were available in NI since the 1960s. Until the mid-2000s when devolution to the local legislative Assembly became more stable, there were 80 – 100 abortions in NI every year.  These were for women who were very seriously sick but mainly for foetal abnormalities. By 2015, there were only 16 abortions carried out – only to save women’s lives.  At the same time, there was a growing movement in the South of Ireland to liberalise abortion and, in particular, to get rid of the 8th amendment to the Constitution – an amendment that sees women’s lives as equal in worth to that of a fertilised egg.

All the while, thousands of Irish women were having abortions, of course. Some 4,000 women from ROI and about 1,000 from NI travel to England each year for abortion while an estimated 2,000 women across the island end pregnancies at home using abortion pills they obtain usually from WomenHelp.org or Women on Web. This paper looks at the different impact of these home abortions on the debates about abortion North and South and at how state and activist responses shaped that impact.

Goretti Horgan is a lecturer in Social Policy at the University of Ulster, a member of the Institute for Research in Social Sciences and Director of ARK’s Policy Unit (www.ark.ac.uk). She is also a director and former chair of the Northern Ireland Anti Poverty Network. A socialist and trade unionist, she has been active in the pro-choice movement in Ireland for over 30 years; a member of the first Women’s Right to Choose Group in Dublin, she was National Organiser of the Campaign against the anti-abortion amendment to the Irish Constitution, 1981-83. Since moving to Northern Ireland in 1986, she has been working to extend the 1967 Abortion Act to the region, and more recently for full decriminalisation of abortion. She is a founder member of Alliance for Choice (NI).